The Endocannabinoid System is a signaling pathway that occupies the central nervous system (CNS; brain and spinal cord), peripheral nervous system (PNS) and immune pathways [1,2]. This network is comprised of two major receptors Cannabinoid Receptor 1 (CB1) and Cannabinoid Receptor 2 (CB2) that, when activated via cannabinoid ligation, affect neurotransmitter release and subsequently influences a number of physiological factors such as immune response, cardiovascular function, bone development, digestion and metabolism, as well as several other processes including wake/sleep cycles, learning, pain response, and regulation of stress and appetite [1,2,3]. 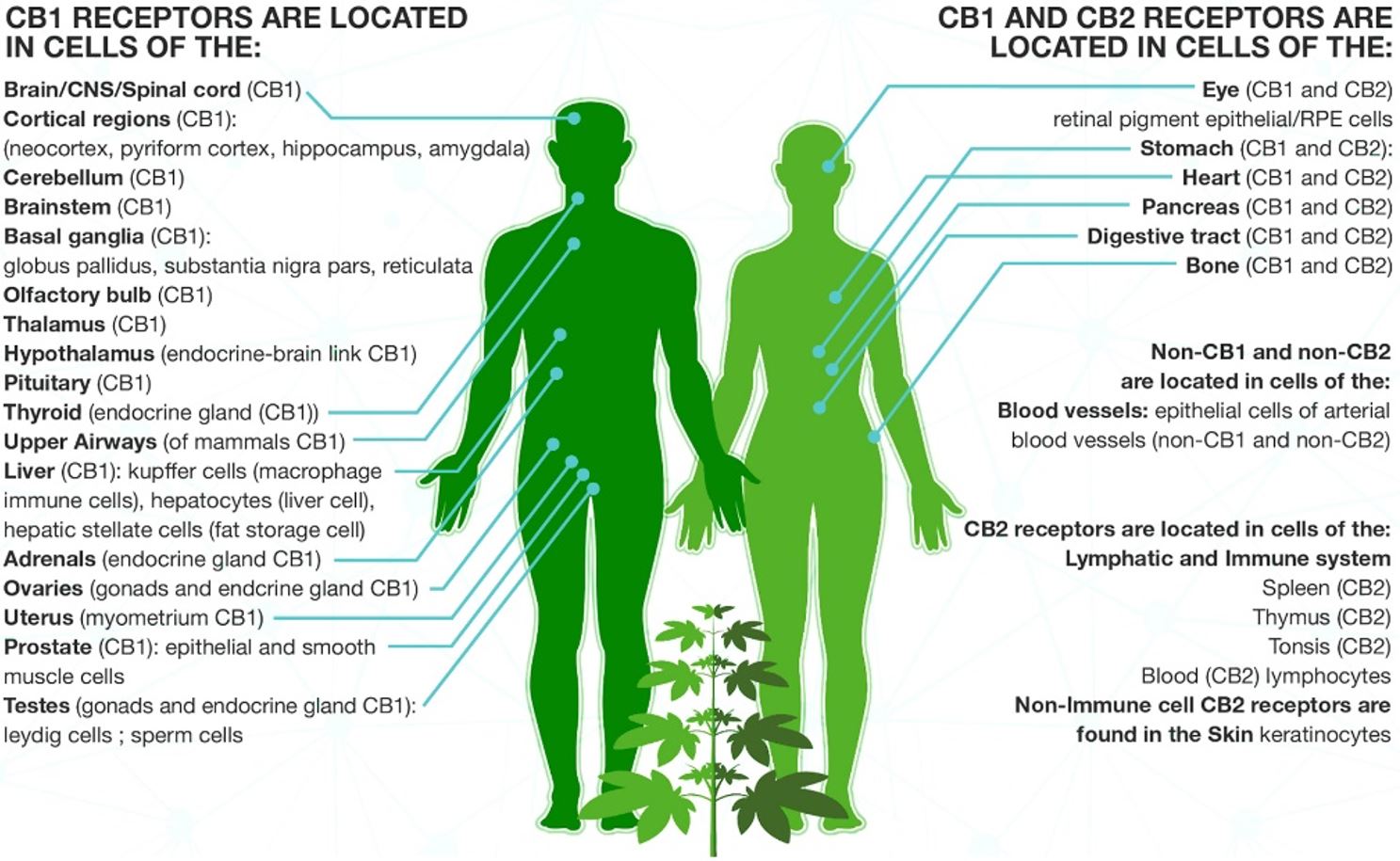 CB1 and CB2 receptors are expressed throughout the body wherein CB1 dominate the CNS while CB2 receptors exist predominantly in the peripheral tissues including the immune system and related organs. A number of cannabinoids including endogenous AEA and phyto-supplied THC have a high affinity for CB1 and interactions with this receptor creates a signalling cascade that is largely responsible for the physical and psychotropic effects brought on by cannabis use [1,2]. In contrast, CB2 receptor activation does not yield psychoactive effects, and rather elicits a range of therapeutic benefits including those against pain, and neurodegenerative happenings associated with disease including Multiple Sclerosis (MS) and Huntington’s disease [37].

Conversely, cannabinoid such as CBD affect CB1 and CB2 indirectly by preventing the breakdown and reuptake of other Cannabinoids allowing for their accumulation and subsequent method of action. Furthermore, CBD activates several non-cannabinoid receptors including the serotonin receptors that are responsible for mood, sleep and memory [2,4,15], and are the target of many pharmaceutical drugs involved in antidepressant, anxiolytic, and neuroprotective effects. 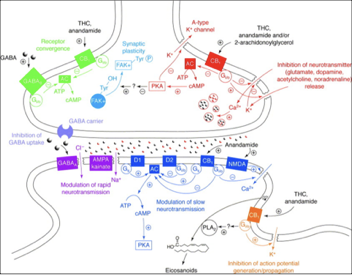 THC is one of the primary cannabinoids found in the cannabis plant and is largely responsible for the psychological and psychoactive effects brought on from cannabis use [1,8,10]. Over the years based on anecdotal and scientific evidence, THC has demonstrated its potential therapeutic benefit toward a number of conditions and symptoms including nausea, vomiting, insomnia, pain, muscle spasticity, tremors, and bronchospasm often brought on by a range of medical conditions (Table 1) [1,8,9,10,11]. Emerging research indicates a high level of therapeutic potential for a variety of health concerns, in some cases even at doses substantially lower than those required to feel the psychoactive effects of THC.

CBD is another major cannabinoid found in cannabis. Unlike THC, CBD does not administer the same psychoactive effect(s) Research is beginning to demonstrate that CBD possesses therapeutic effects through its ability to target several other receptors, including 5-HT1A serotonin receptors, and its blockage of neurotransmitter uptake [2, 4, 15]. It has become increasingly evident that CBD greatly benefits patients suffering from epilepsy by significantly reducing the frequency of re-occurring seizures [1, 6, and 9]. There are several other conditions and related symptoms that have shown to benefit from CBD related therapy (see Table 1). Because of the lack of accompanying psychoactive responses, CBD is often a desirable choice for many individuals seeking cannabinoid therapies without the side effect of impairment.

However, THC has also been shown to effectively treat anxiety, stress, and depression, as well as symptoms of Multiple Sclerosis (MS) [1,10,12,13], Parkinson’s disease [14,15], and those induced from cancers including glaucoma [1,7,10]. Alternatively, CBD has been shown to treat symptoms of epilepsy [1,6,9], diabetes [5,16], varying symptoms of cancers [5,16], mood disorders including Posttraumatic stress disorder (PTSD), Attention deficit disorder (ADD), Obsessive-compulsive disorder (OCD) [9,15], and inflammatory diseases such as arthritis and inflammatory bowel disease (IBS) [1,16,17,18,20]. In addition, the benefits of CBD may also help with weight management and promote cessation of addictions to smoking (tobacco cigarettes) [5, 21, 22, 23]. Although the benefits of cannabinoid therapies often differ between THC and CBD, there is often an overlap between the chemicals in which a combination of more than one is preferential. 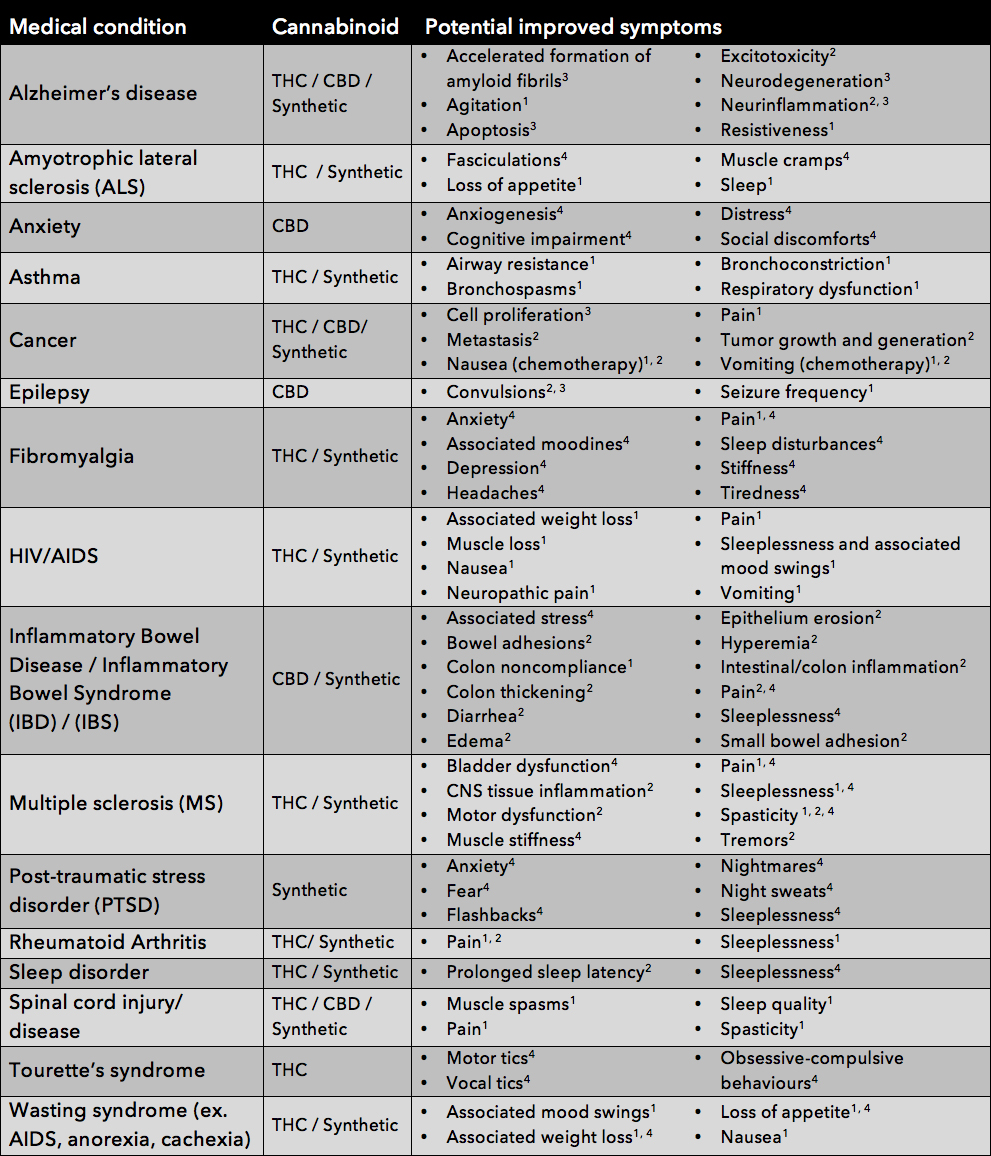 Table 1: POTENTIAL THERAPEUTIC USES OF CANNABINOIDS AND THEIR SPECIFIC TARGETED SYMPTOMS, as suggested based on information collected via clinical trials1, pre-clinical trials2, in vitro assays3, or anecdotal reports4 [1].

It is important to note that the medical benefits of cannabinoids are not limited to the information displayed in this chart. The Endocannabinoid System has been shown to affect all regions of the human body and as such is thought to be involved in several ailments including, but not limited to, liver disease, pancreatic disease, obesity, osteoporosis, as well as several joint and movement disorders. Conversely, some research presented in this table is not yet conclusive and/or is among preliminary findings that have yet to be affirmed with further investigation. As such, this table is to be regarded as a summary of the wide range of POTENTIAL therapeutic benefits of cannabinoid treatment.

In recent years, the numbers of clinical studies providing evidence of cannabis and its medical benefits have increased by 300%. Cannabis-derived medicine brings renewed hope to patients suffering in the plight of diseases such as Chronic Neuropathic Pain, Cancer, Epilepsy, Chronic Obstructive Pulmonary Disease (COPD), AIDS and Diabetes. Furthermore, with the current opioid crisis affecting the North Americas there is a necessity for replacement medication. In 2017, the hospitalization rates for opioid painkiller dependence / abuse and for opioid overdoses declined on average by 23% and 13% respectively in states where marijuana was permitted for medicinal purposes [37].

THE HISTORY OF MEDICAL CANNABIS

For centuries, Cannabis was widely used without any reservations for its medical benefits. In fact, the first medical use was reported around 2700BC when the Chinese Emperor Shen Neng prescribed a cannabis tea for several indications including constipation, malaria and memory loss. In 1200 BC, the Egyptians used marijuana for glaucoma and enemas while in India it was used as an anesthetic as well as to treat leprosy. By the 1600s, cannabis was particularly popular in Europe as an antidepressant. In the 1700s, when the British colonists arrived in America, they brought over bags of hempseed as the plant was a cash crop. By the 1800s, medicinal cannabis products were available in the U.S.A. as oils, lozenges, creams and candies. The Irish doctor, Sir William O’Shaughnessy, was responsible for many of these dosage forms to treat cholera. Cannabis was published in the US Pharmacopeia in the 1950s for treatment of goat, tonsillitis, anthrax, alcoholism, incontinence and insanity (Centennial Presents, The Complete Guide to Medical Marijuana, 2018). In 1890, a Lancet publication written by the President of the British Medical Association described its use in several indications including migraine and neuralgia.

Over time and with the development of advanced medicine, to popularity for cannabis decreased . For example the United States Congress introduced the Pure Food and Drug act in 1906 which initiated cannabis prohibition. Shortly thereafter, the passing of the Marijuana Tax Act in 1937 added another hurdle requiring all purchases to have a tax stamp from the U.S. Treasury, who refrained to issue them for cannabis. This was opposed by the American Medical Association as this made cannabis illegal and could no longer be studied for its medical benefits. This was further enforced by the Controlled Substance Act that Congress passed in 1970. It wasn’t until 1996, when the State of California passed the Compassionate Use Act that exempted patients and caregivers possessing doctor-recommended cannabis from criminal prosecutions. This was the first attempt in the world to provide a medically regulated framework and market (Centennial Presents, The Complete Guide to Medical Marijuana, 2018).

Over time and with the development of advanced medicine, to popularity for cannabis decreased . For example the United States Congress introduced the Pure Food and Drug act in 1906 which initiated cannabis prohibition. Shortly thereafter, the passing of the Marijuana Tax Act in 1937 added another hurdle requiring all purchases to have a tax stamp from the U.S. Treasury, who refrained to issue them for cannabis. This was opposed by the American Medical Association as this made cannabis illegal and could no longer be studied for its medical benefits. This was further enforced by the Controlled Substance Act that Congress passed in 1970. It wasn’t until 1996, when the State of California passed the Compassionate Use Act that exempted patients and caregivers possessing doctor-recommended cannabis from criminal prosecutions. This was the first attempt in the world to provide a medically regulated framework and market (Centennial Presents, The Complete Guide to Medical Marijuana, 2018).

Cannabinoids have demonstrated a good safety profile. THC has a very low toxicity both in the short and in the long term. To date, there is no evidence to support a death caused exclusively from a cannabis overdose however the estimated lethal dose of intravenous THC is 30 mg/kg [1]. While research is working toward elucidating the effects of long-term cannabis use in humans, it is demonstrated to be relatively well tolerated in animals without serious deterioration in general health. Some acute effects, however, include increase in heart rate, reddened eyes, and a dry mouth. In terms of psychotropic effects, a mild euphoria, enhanced sensory perception, fatigue, and eventually dysphonia together with anxiety [1,34].

The potential toxic effects of CBD have been extensively reviewed [31] with a recent update of the literature[32]. The following are some of the relevant findings to date from in vitro and animal studies:

Further studies were carried out to assess the potential damage that might be done to the developing fetus by exposure to cannabis or cannabinoids during pregnancy. Treatment of pregnant rabbits with THC at doses up to 5 mg/kg had no effect on birth weight and did not cause any abnormalities in the offspring [34].

[31] Iffland, K. and F. Grotenhermen, An Update on Safety and Side Effects of Cannabidiol: A Review of Clinical Data and Relevant Animal Studies. Cannabis and Cannabinoid Research, 2017. 2(1): p. 139-154.